About Shakespeare and Company

When I was preparing my blog posts about Paris, I didn’t know what to do with Shakespeare and Company. So many people already talk about this place that I didn’t feel like it was necessary for me to tell you what a cosy bookshop this is. Pinterest and Instagram already told you that. But on the other hand, this store has so much history, it felt wrong to just ignore it. So I decided to not just put it in my article about Parisian bookstores, because that wouldn’t do this amazing place justice. Instead, I would give it its own article, so I would have the space to elaborate on it.

So I’m not gonna tell you how cute this shop is. You’ll just have to believe me that it is. You’ll also notice I don’t show any picture of  the inside of the shop. This is because I only post pictures that I made myself on this blog, and Shakespeare and Company has a no-picture-taking policy. I respect that, and I would like to ask any other visitors of the store to respect that as well, because the amazing vibe of Shakespeare and Company would soon diminish the second every tourist starts using it for their new profile photo.

First a bit of history: Shakespeare and Company was opened in 1919 by Sylvia Beach. That bookstore, however, was on another location in Paris, a few minutes walking distance. It was closed in 1941 by the Germans and Beach got interned during the war. The store on the current location was opened in 1951 by George Whitman, an admirer of Beach (who even named his daughter after her). The store sells new books, antiquarian books, and has a reading room where you can sit down with books that are not for sale. In 2005, Sylvia Whitman took over the management of the store. It is still thriving and doesn’t seem to be affected by new players like Amazon.

Shakespeare and Company isn’t just a bookstore. It also hosts literary events, has a café and is a place to sleep for anyone who wants to help out in the shop. It’s a meeting place for many famous writers: the old shop owned by Beach welcomed authors like Hemingway, Fitzgerald and Eliot. In 1922, it even served as a publisher when Beach decided to bring out Ulysses (without any experience as a publisher). Although fragments of Ulysses had already been published in a literary magazine, it was too controversial for any other publisher. Beach was angry about this sort of censorship and just decided to publish it herself. The first copy arrived at James Joyce’s birthday, February 2nd.

The second shop was opened in the fifties by George Whitman, at the time when Paris was flooded by American veterans. American books were very popular, and books could be sold in France, that would have been banned in the United States. The shop is located in Quartier Latin, a neighbourhood where a lot of students used to live, and Whitman made sure he had the right stock for them. He also organised free seminars, like classes in Russian and Italian conversation. The store has a few beds, and anyone who needs a place to sleep (tumbleweeds, as Whitman called them) can stay, as long as they do three things: help out for an hour or two in the store, write a one-page autobiography, and read a book in a day. Till this day, there are still two to six tumbleweeds at Shakespeare and Company every night. 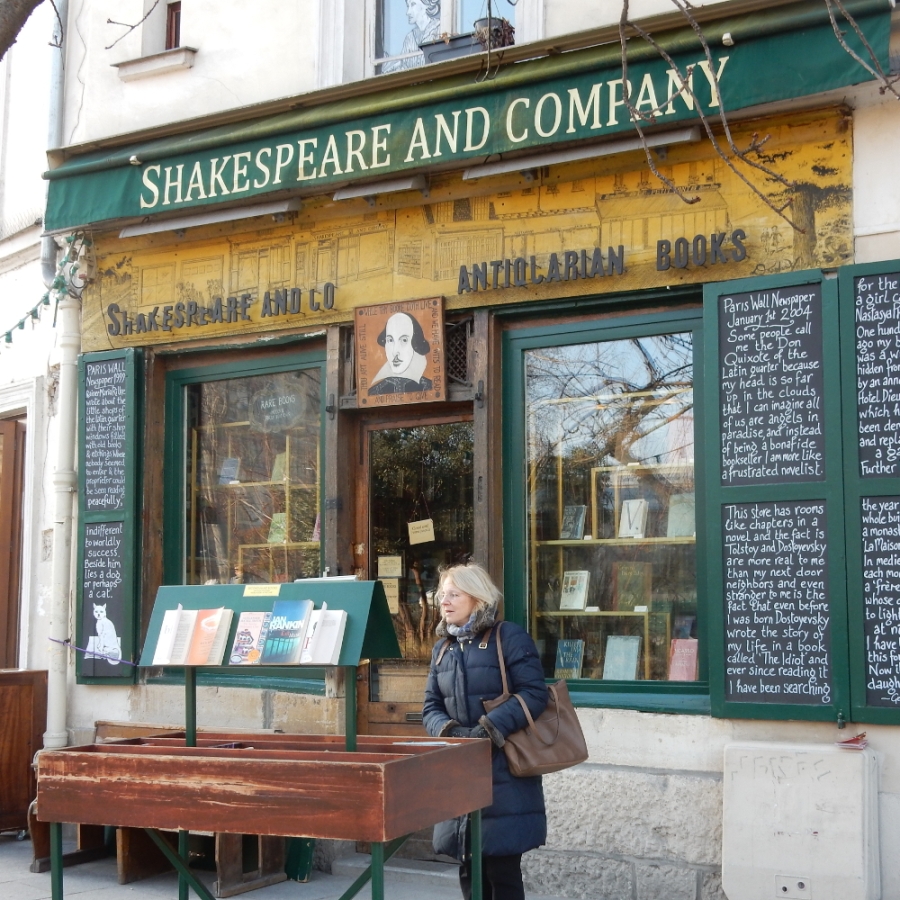 In the sixties, Shakespeare and Company was a big meeting point for all kinds of activists. Whitman organised literary readings and discussions and was a host to Marxist study groups and women’s collectives. The shop was visited by Black Power-activist Stokely Carmichael, Yoko Ono, and American anti-war leaders. In May 1968, students protests clashed with the police and the Quartier Latin became a warzone. Whitman opened his store for protester trying to escape from the police. This was in the same period Whitman had to close his shop for two years because the government claimed he didn’t have a permit for the shop. For two years he had to stop all commercial activities, but he still kept his lending library open and kept organising events. After the protests, his permit finally came through and the store could be reopened again.

In July 1990, a fire broke out in the bookstore. Flames and water destroyed an enormous part of the collection and the shop, all uninsured. All over the world, literary events were organised to raise money for the renovation of the store. Two years later, most of the shop was restored.  In the new millennium, Whitman’s daughter Sylvia started helping out more and more in the store, especially modernizing things, but trying to still keep the spirit of the bookstore alive.

Of course, there are a lot of bookstores that also organise literary events, but I know of no bookstore with the same hospitality as Shakespeare and Company. Everything they organise is done out of interest and kindness, and not at all for profit. George Whitman just never had any interest in making a profit and knew many periods of poverty, for example when the shop was closed for two years and again after the fire. Shakespeare and Company inspired complete generations to write and read, and hopefully will keep doing so for many more years to come.

There’s a lot of information about Shakespeare and Company available, online and in stores. Personally, I recommend A History of the Rag & Bone Shop of the Heart, edited by Krista Halverson, with contributions by many writers, tumbleweeds and Sylvia Whitman herself, with stunning pictures.

My name is Francine and I love reading and traveling. I try to combine these two by blogging about the literary places I visit on my travels. View all posts by booksien

2 thoughts on “About Shakespeare and Company”